Nestroy is the supreme comic dramatist of the German language, a creative genius on a par with the other great names of international comedy. For nearly thirty years – roughly 1830 to 1860 – he dominated the commercial stage in Vienna, working in a theatrical culture tuned to entertainment, and the most famous of his satirical comedies, which he wrote when he was at his peak for about a decade and a half from the late 1830s, continue to be widely performed.

A phenomenally hard-working actor and a fertile playwright (some 76 plays have survived), and for six years at the end of his career (1854–60) a successful director of the Carltheater in Vienna, he is known to English-language audiences not by his own work but through two brilliant but free adaptations of the comedy Einen Jux will er sich machen, Thornton Wilder’s The Matchmaker (1955) and Tom Stoppard’s On the Razzle (1981, 1982); Stoppard in particular captures the breathlessness of the comic action – even if not the language. This is because Nestroy’s texts, which depend on brilliant wordplay, have proved resistant to translation in a way that the works of the great Parisian comic playwrights, Molière, Labiche, Feydeau, have not. We still lack a collected volume of convincing translations. The best attempt is probably a volume Three Comedies by Johann Nestroy (New York: Ungar, 1967) containing texts in American English by two Austrian émigrés, Max Knight and Joseph Fabry; but authentic translation recapturing the linguistic verve of Nestroy’s work remains a tantalising challenge.

What has generally deterred translators is that Nestroy’s language includes registers of Viennese German. He is not a ‘dialect dramatist’ in the usual sense: that is, he did not write in an idiom cashing in on cosy local colour. Indeed his work is not cosy at all. His language is highly stylised, ranging through registers from stagy literary German to abrasively natural Viennese, full of theatrical allusions, enriched by flights of vivid metaphor, and constantly exposing the clichés that mask hypocrisy and deception.

The period when he wrote was one of flourishing comedy in the great European theatrical centres, Paris, London, and Vienna; his career overlaps with those of Scribe, Boucicault, and Labiche. These playwrights all share an international stock of comic plots and devices, but Nestroy is distinguished by his linguistic inventiveness, playing with contrasting registers and flights of vivid metaphor in reflections on the injustice of a world governed by chance (or Providence), whose arbitrary dispositions can be set aside in the fictional world of comedy – only for the conventional happy ending to underscore the knowing improbability of the fiction. His linguistic awareness and scepticism made him a natural parodist. His exposure in Judith und Holoferrnes (1849) of the pretentiously inflated language of Hebbel’s tragedy Judith is recognised as the classic parody in German; his later works include parodies of two of Wagner’s operas, Tannhäuser and Lohengrin.

The virtuoso brilliance of his language was not lost on his contemporaries, even if many mid-nineteenth-century critics tended to undervalue ‘wit’ and demanded something more sentimental, more edifyingly moralistic. Its quality and importance came to be fully appreciated only when his work was championed by the twentieth-century Viennese satirist Karl Kraus. It was a Nestroy quotation that Wittgenstein chose as an epigraph for his Philosophical Investigations: ‘Progress always appears much greater than it actually is.’

Like much commercial comedy in the early nineteenth century, especially in Paris, Nestroy’s plays contain musical numbers; he was fortunate in being able to collaborate for most of the 1830s and 1840s with a gifted composer, Adolf Müller, who worked for the powerful director Carl Carl as Kapellmeister at the Theater an der Wien. The musical items frequently include a Viennese speciality, comic medleys based on operas of the day (Nestroy began his career as an operatic bass-baritone). In his mature work, however, the musical element is increasingly concentrated in two or three solo scenes, consisting of a satirical song and a linked monologue, performed by the main character, who was usually played by Nestroy himself. These breaks in the illusion, a century before Brecht, relate the fictional action to wider issues in the real world. The commercial theatre was subjected to strict censorship – a restraint on any satirist, but one with the long-term advantage that Nestroy’s satire is not directed at specific cases (which was forbidden) but is couched in general and therefore less ephemeral terms. His most famous plays reflect a deep-seated discontent with a static society (Einen Jux will er sich machen, 1842 – Stoppard’s ‘On the Razzle’ is the best possible rendering of the title); they satirise prejudice (Der Talisman [‘The Talisman’], 1840), moral double standards (Das Mädl aus der Vorstadt [‘The Girl from the Poor District’], 1841), or false friendship (Der Zerrissene [‘A Man of Moods’], 1844). Only when censorship was briefly lifted after the outbreak of revolution in 1848 was Nestroy able to tackle political issues head-on. The result, Freiheit in Krähwinkel, was a satire of the revolution itself; in this case we are fortunate that we can get something of the flavour of Nestroy’s style from a translation by Sybil and Colin Welch, Liberty Comes to Krähwinkel, which was published in 1960–61 in the Tulane Drama Review.

The universal scepticism characteristic of Nestroy’s world view is expressed in plays carefully crafted to have all the lightness of farce. Their knowing composition is reflected in their genesis, in that they often went through several drafts. These are documented in the 41-volume critical edition of Nestroy’s works, the Historisch-kritische Ausgabe, edited by Jürgen Hein, Johann Hüttner, Walter Obermaier and W. E. Yates, which is expected to be complete in 2004. Two supplementary volumes are planned, which will include biographical documents and addenda and corrigenda to the edition. Nestroy studies at university level have been especially strong in the English-speaking world, and over half the volumes of plays in the edition have been edited by colleagues working in the UK and in Australia.

The International Nestroy Society (Internationale Nestroy-Gesellschaft) publishes a journal, Nestroyana, which has established itself as the main organ for scholarly articles on Nestroy. It also carries reports on conferences, including the annual international conference (Nestroy-Gespräche) that take place each summer in Schwechat, and a number of reviews. Published on behalf of the Internationale Nestroy-Gesellschaft by Verlagsbüro Mag. Johann Lehner Ges. m.b.H. (Schwarzenbergstraße 5, A 1010 Wien), Nestroyana appears twice-yearly; articles are in German only. For more details and index of contents see: Nestroyana.

There have been three monographs in English:

An article from the mid-1990s that has interesting illustrations and can be accessed on the internet is ‘Collecting Nestroy’, by Oskar Pausch, sometime Director of the Österreichisches Theatermuseum, Vienna, at: sibmas.

An English-language review article providing a judicious survey of the principal publications issued in connection with the bicentenary of Nestroy’s birth (2001) is: Peter Branscombe, ‘The Nestroy Year’, in: Austrian Studies 11 (2003), pp. 185–95. 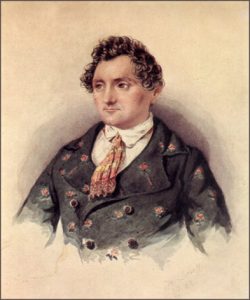